skip to main | skip to sidebar

Is bigger better? (create your own joke here) 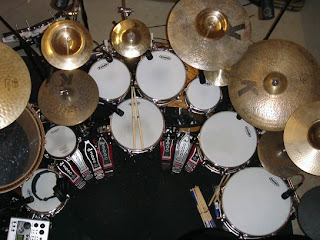 It seems that lately, in order to keep up with the Joneses, or the Minnemans, the Donatis, and the Langs, everyone is bringing out a kit like this. My question is, do we really make better music with this much stuff? I understand wanting to have many different sound options available at any given time, and I appreciate the skill it takes to navigate all the pedals in time etc..(let alone remember which one is connected to which thing) but come on!! Do you really need a mounted bass drum in addition to the two that you're already playing? It seems these days that people (mostly other drummers) are more impressed if you hit more stuff. I just don't think more stuff equals more musicality.
The reality is that the guys that use this kind of set up either mostly do clinics, hire a band to support their specific style of playing, or get hired to do the kind of "over the top chops" playing that they are known for. I'm not discounting the talent level of these guys, it's just that if most of us brought a kit like this to a gig we'd get fired before the first note. Here's my most recent setup. 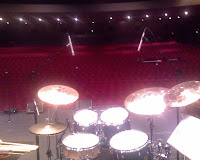 Depending on the style of music I'll add a couple more cymbals, cowbells, and a maybe a woodblock to my palate but really, how many drums do I need to still sound like me? I can still play lots of notes (if needed) but I don't need all the extraneous stuff.

Check out this link where Dave is just playing a Yamaha Hip Gig kit (even using the stool) and a normal assortment of cymbals.

It still sounds like Dave, and great at that. So does he really need all that other stuff?

Here's another example of Ed Shaunessy and Buddy Rich in a great drum battle. These guys are each playing 5 piece kits (with the 2nd floor tom usually just functioning as a towel holder). Is it any less monstrous than Donati or Lang or anyone like that? I don't think so.

My rule is this. If it doesn't fit in the car (which sometimes is a Toyota Corolla) or on the Rock N Roller cart, it doesn't go to the gig. Usually I end up with a four or five piece kit, one ride, one or two crashes, and the hi-hat. If I can't make music with that, than something is wrong with me, plus I'm usually out the door before the guitar player!

Try it sometime.
Posted by eatdrums at 2:22 PM